As an Israeli, you get to experience lots of different food types from all kinds of ethnic groups. Being a daughter of Moroccan mom and Polish dad, the variety of foods I’ve tasted are endless. But one thing I’ve learned, no matter where you’re from, in all ethnic groups, there is one signature dish of stuffed vegetables. This vegan stuffed chard recipe is Middle Eastern-style and it full of traditional flavors.

Stuffed vine leaves are a very popular dish in Mediterranean and Middle-Eastern cuisine. One thing is for sure, a flavorsome stuffing of just the right amount of rice and herbs makes for a great recipe.

Use this vegan stuffed chard recipe for other vegetables

There are many ways to stuff vegetables. Some people add meat and others use lentils. The most popular vegetables for stuffing are red peppers, squashes, zucchini, onions, beets, vine leaves, eggplant, tomatoes, and more.

You can use this rice mixture from this recipe to stuff different kinds of vegetables too!

This recipe has two major ingredients: chard and seasoned rice.

Chard is considered to be a superfood. It’s packed with minerals, vitamins, and fiber. This recipe is healthy and tasty. For more health benefits, we’re going to stuff the chard with seasoned rice in a lemon marinade.

How to season the rice to stuff the chard

We recommend using basmati rice, but you can use whole rice as well.

Wash the rice in a strainer until the water runs clear. Meanwhile, blend the tomatoes, celery, parsley, onion, and green onion until nicely chopped. Add the mixture to the rice with 1 tablespoon of salt and one tbsp of Baharat.

Baharat is a spice blend used in the Middle East. Baharat means “spices” in Arabic. In the mixture, you can find:

How to roll the chard – All the tips and tricks

After filling all the leaves, place them in a wide saucepan, and squeeze another lemon for a bit more flavor. Sprinkle sea salt and pour the water until it covers the stuffed chard about 1 centimeter. Place the lid on the pan. Now, it’s the hardest part—we need to wait. 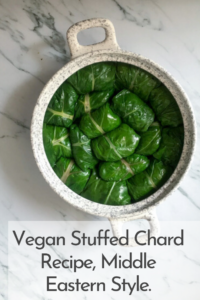 Readers want to feel the weblog is alive, and frequent posts present this.